dive
one
bright
Is Atlanta in Daylight Savings right now?
You are a gamer!
Are you the greatest Animal Crossing character?
Ideas for things to do
🌊🌊🌊
I went to the Noguchi museum and all I got was this image

Guilt Drill AMV I made with Ammad

We got 2nd place!

We returned in 2020. This was another good year, we had a decent pace down at this point. The idea this year was to create a smoothie that is controlled by a Werkstatt. I have a lot of interest in contintuing food-based synthesis. The LFO/VCO controlled how fast each particular motor spinned and in turn how much of the particular smoothie ingredient makes it into the blender. It was all VERY DIY maybe to a fault. I had a good time make it out of cardboard and toy car motors though. A follow-up would make it out of real materials. Here's a video of our performance (thank you Sky!!). We won best performance for this year! 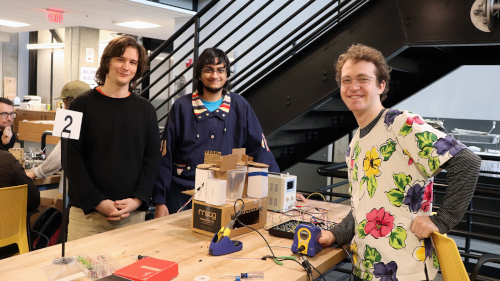 2019 was our peak. We got 2nd place for our car synthesis device. We'd had the idea for a while, but had made some ill-fated attempts at doing the sensors ourselves. To mitigate any of our own sensor placement, we used the obd-ii port on my car to pull data from the engine. We used the speed, RPM, throttle position and the fuel trim to control the Werkstatt. The judges took a ride in my car which was 100% humorous. It sounds like this. I'd like to do this again but a granular synthesis approach. 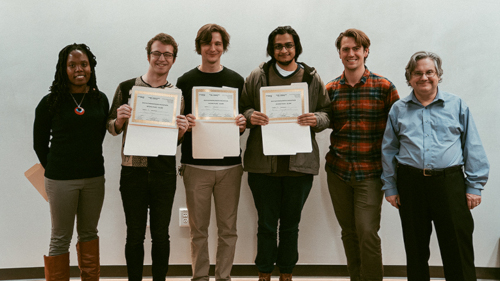 In 2018 we did not receive an honorable award for our efforts. We did make it to the final round. We created a synthesizer Kalimba by tapping into the keyboard circuit of the Werkstatt. We used the worst capacitive touch circuit imaginable. It was just a transistor where the bass was tied to each prong of the kalimba. The capacitance/voltage in the hand was enough to saturate the transistor and complete that particular key. Our circuit design was not excellent, but we did create an all analog instrument this year.

I got an honorable mention in the 2017 Moog Hackathon at Georgia Tech. We built something similar to a chapman stick and dubbed it 'Sigmoido'. It works by laying out a series of resistors to create specific resistances at each fret. When the string is pressed down, the make-shift ohmeter measures the resistance across the string and creates a particular pitch change or tone change within the Werkstatt. 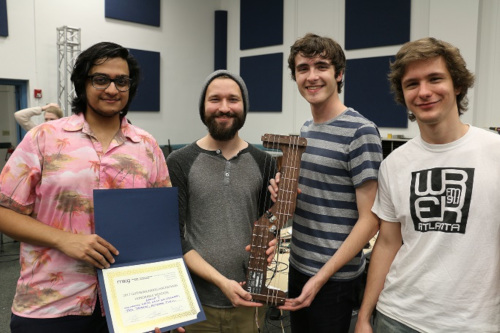 2017 was my first Moog Hackathon. We created an analog shruti box that was foot pedal controllable. It was clearly a first effort but was a lot of fun to build. This is was my first positive experience to music technology and I'm thankful for that.

I was president of Musician's Network at Georgia Tech from 2017-2018. It was a learning experience, but also one of the most down periods of my life. I think about this period a lot. MN got into some heat over the new student center and I was a interviewed for a bit of that here. MN was a formative part of my life. I played a lot in high school, but I think this is where I really engaged with music as a community.

I have made a little solo music. I am making more.

I released an EP for the EP Race of 2021. I was only able to make 1 though lol, I really enjoy it though!

Kucoshka was/is my band from high school. I joined was I was ~14 and continued till I was 21. I'm not sure what to think of it still.

Kucoshka got featured in theneedledrop's It Came From Bandcamp series. This sent me into an existential crisis as it was shortly after I left the band. We ended up getting another review from Scaruffi which furthered the feelings.

I'm no longer in James Hunter USA. It's the most straight-ahead band I've ever been in and I sometimes have difficult talking about it because of that. I do genuinely think it is good and enjoyable pop-rock music.

This project morphed into New Weirdos , which I'm also no longer in!

Live Action Anime Boy is one iteration of the Styrofoam Punk genre. The concept is to create an entire album in one night, from writing to recording.

Hot for Math Teacher (H4MT) is math rock band that formed my freshman year, then disbanded, then rebanded to record and play a final show in 2019. We are still the greatest math rock band of all time.

I used to run three shows on WREK Atlanta

I mostly just do engineering work for the station now!

WREK Atlanta is still the greatest radio station in existence

A Bit Off Broadway, a musical theatre show

I'm occasionally on Stonehenge nowadays, but I am rarely on the radio anymore.